Pregnancy Discrimination at a Non-Profit in New York City?

MoMA PS1, an arts-based not-for-profit in Queens, is being sued for pregnancy discrimination.

This surprised me. I thought (hoped?) our society had moved passed punishing women at work for having children. If any workplace is safe from this bad behavior it’s a non-profit based in liberal New York City, right? Art non-profits are supposed to be open-minded and inclusive!

Unfortunately, this is far from the case. The MoMA PS1 story and many others like it demonstrate how pregnancy discrimination still poses a threat to women in the workplace. If you work at a company with 15 or more employees federal law declares it illegal for your organization to treat anyone differently because of pregnancy, childbirth or other related conditions. This law has been in effect since 1978.

City and State laws have applied this law to even smaller companies but there is no arguing with the fact that workplaces have had 40 years to figure out how to accommodate women having children. Still, many organizations have trouble doing this.

So what happened at MoMA PS1? Nikki Columbus was offered a curator position in August 2017. After she told the museum’s chief curator she just had a baby her job offer was rescinded.

Ms. Columbus’ complaint with the New York City Commission on Human Rights alleges she was recruited for the job when she was five months pregnant. She had numerous in person meetings with the chief curator and other executives while visibly pregnant. When the museum offered her the position on August 12, 2017 Ms. Columbus tried to negotiate a higher salary and staying mindful about finishing her duties at the company she was then employed at.

MoMA PS1 seemed open to this, saying “we can be flexible on the transition into the role here.”

In late August Ms. Columbus suggested she start part-time in September and go full-time in October telling her soon to be supervisor she hoped to work from home to start as she recovered from having a baby. The chief curator allegedly replied “Why didn’t you tell me this two months ago?”

A few days after that call Ms. Columbus received an email from the museum’s COO saying they considered her call a rejection of the offer. She said she very much wanted the job. Unfortunately for Ms. Columbus, the COO said the offer was “no longer active.”

Most workplaces reward men for having children while punishing women. Michelle Budig of the University of Massachusetts, Amherst found men’s earnings increase by 6% when they become parents whereas women’s earnings decrease by 4%. Our unconscious bias is affecting our workplaces. Men are rewarded because having children makes them seem more stable. Women with children are penalized because we assume they will be less present at the office once a child arrives. If this bias affects a liberal non-profit it likely affects your workplace too.

Let’s start to actively challenge these assumptions. One way to do this is to change how we talk about family in the workplace.

What does your organization’s parental leave policy say? Is it called a Maternity Policy? If so, it’s only directed at  half the population affected by new family members. Are women treated differently than men under the policy? Ask yourself or your bosses why. If men and and women are treated equally under your policy notice if men are taking advantage of the benefits. Consider how you might advocate for updating an unequal policy or encouraging colleagues to embrace all the benefits of the policy. 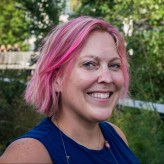 Previous StoryRun a Business in New York? You Need to Know about the New Anti-Harassment Requirements
Next StoryJury Duty Showed Me the Power of Diversity and Inclusion